What is the H3N2 flu and how bad is flu season this year?

This year's influenza season, dubbed "moderately severe" by health care officials, has hit the United States hard, with the number of recorded cases of the disease in parts of the country up more than 500 percent.

Thirteen children have died from the flu since October, according to the Centers for Disease Control and Prevention, with widespread flu activity being reported now in 46 states. California alone has seen 27 flu deaths this season, with 41,000 cases of flu  confirmed in the United States as of the week of Dec. 27.

The level of flu could soon be classified at epidemic level, Dr. Daniel B. Jernigan from the CDC said on ABC's "Good Morning America" this week.

"What we're seeing this year the influenza season started earlier and seems to be peaking right about now," Jernigan, who is director of the Influenza Division in the National Center for Immunization and Respiratory Diseases (NCIRD) at CDC, told "GMA."

"That's about a month earlier than it normally would be peaking," he said, "so lots of cases [are] happening, in lots of states, all at the same time."

Jernigan also addressed the talk of the flu's effectiveness.

"We know that the influenza vaccine is the best way to prevent, but in this season it is not as effective as it is for the other viruses that circulate," Jernigan said on "GMA."

Jernigan explained that the vaccine is more effective in trying to prevent other flu strains circulating in the United States than it is for the main strain of flu that has hit the U.S. this year.

Here's what there is to know about this year's flu season.

What kind of flu is being seen the most?

The prominent strain in Australia's flu season was the H3N2 form of influenza A. That strain is what doctors are seeing in this country as well. The strain is included in this year's flu vaccine.

How effective is the flu vaccine?

What are the symptoms of the flu?

The symptoms of flu can come on quickly. If you have these symptoms you need to see a doctor. The time from when a person is exposed to flu virus and infected to when symptoms begin is about one to four days, with an average of about two days.

What can you do to try to prevent it?

If you have not gotten a flu shot, it's late, but it is not too late. While thousands have gotten the flu, the influenza season is just reaching its peak. The CDC recommends the flu shot for everyone over the age of 6 months – infants and older people should especially be inoculated, according to the agency.

Remember, after the vaccine, your body can take up to two weeks to build up defenses against the flu virus.

If you are allergic to eggs, let your medical provider know that before you get the vaccine. The flu vaccine is grown using eggs.

Can you catch the flu from the vaccine?

No, you don't get the flu from the vaccine because the vaccine is made from an inactivated virus that can't transmit infection.

What if I already have the flu or at the symptoms of it?

Anti-viral medication – like Tamiflu – will help lessen the symptoms of flu. However, you need to start taking anti-virals within 48 hours of the onset of flu symptoms.

There seems to be a lot of flu around, is it an epidemic?

There are specific parameters used to determine if the flu has reached epidemic levels. Influenza is considered at epidemic level when the number of deaths from flu surpasses a threshold set by the CDC. In the last week of reports from the agency, the number of flu deaths was 0.2 percent below the threshold the CDC set, meaning a flu epidemic is possible soon.

In years where the flu is considered "mild," the CDC estimates it kills around 12,000 Americans. In moderately severe years, as this one is being called, 56,000 could die.

The recommendation to not use the nasal spray flu vaccine was renewed for the 2017-2018 season. Only injectable flu shots are recommended for use again this season.

Flu vaccines have been updated to better match circulating viruses.

A quadrivalent recombinant flu vaccine (a vaccine designed to protect against four different flu viruses; two influenza A viruses and two influenza B viruses), is available this season. 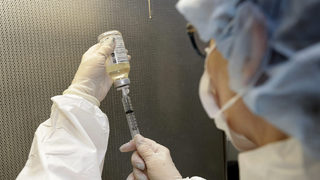