YAVAPAI COUNTY, Ariz. — Sharon Lee Gallegos vanished without a trace in the summer of 1960 as she played with other children outside her family’s New Mexico home.

Ten days later, the burned body of a young girl was found partially buried in a desolate stretch of desert outside of Congress, Arizona.

On Tuesday, nearly 62 years after both tragedies, Arizona authorities announced that DNA and genetic genealogy have proven the girls to be one and the same.

The disappearance and subsequent murder of the 4-year-old is the oldest cold case the National Center for Missing & Exploited Children has helped to solve.

For more than six decades, the Yavapai Jane Doe remained unidentified. She was buried in a cemetery in Prescott with a headstone that bears the sad name “Little Miss Nobody.”

The stone also bears the year she was slain and a Bible quote: “Blessed are the pure in heart.”

Yavapai County Sheriff David Rhodes commended the detectives and volunteers who never gave up on the unsolved case over the decades.

“The unidentified little girl who won the hearts of Yavapai County in 1960, and who occupied the minds and time of our sheriff’s office and partners for 62 years, will now rightfully be given her name back,” Rhodes said in a statement. “She will no longer need to be referred to as ‘Little Miss Nobody.’”

Sharon’s mother, Lupe Gallegos, died in 2011 at the age of 87, but the girl’s nephew, Rey Chavez, attended a news conference at which the announcement was made.

“Our family is so grateful to finally have answers,” Chavez said. “We want to thank the people of Prescott for taking care of my aunt for 62 years. Thank you for keeping her safe.”

Chavez, who was born five years after Sharon was abducted, said he grew up hearing about her disappearance. According to the NCMEC, he wrote a research paper on her case in high school.

'We as the family want to say thank you.'

The 4 year old girl from New Mexico was kidnapped & killed in 1960.

The family intends to give his aunt a proper headstone with her name and her date of birth, which was Sept. 6, 1955. They have not yet decided if they will move her back to New Mexico or leave her to rest in the community that embraced her in death.

“Thank everyone for enabling our family to be at peace,” Chavez said.

The case was solved with the aid of Othram Inc., a Texas-based forensic lab that specializes in genetic genealogy. According to authorities, it took just three weeks for Othram’s genealogists to trace the slain girl’s DNA to the Gallegos family.

Rhodes said that cold case detectives are now tasked with finding out what happened in the 10 days between Sharon’s abduction and her body being found.

Watch Tuesday’s news conference below, courtesy of ABC 15 in Phoenix.

Sharon, who was nicknamed “La Huera” for her blonde hair and fair skin, was playing with two other children in the alley behind a home on Virginia Avenue in Alamogordo the day she was taken. She lived in the home with her grandmother, her mother, her aunt and an uncle, as well as six other children.

Sharon was the youngest of the children.

Shortly before 3 p.m., the children playing together were approached by a man and a woman driving an older-model green car.

News reports from the day after the abduction said one of Sharon’s playmates described for police what happened next. The child said the “old green car” stopped and a woman stepped out, asking Sharon to go with her.

The woman said she’d buy the girl clothes and candy, according to Associated Press coverage.

When Sharon refused to go, the woman grabbed her and dragged her into the car, the AP reported.

“She’s my baby and I miss her,” Gallegos told the Alamogordo Daily News. “I love her so very much.”

No motive for the kidnapping could be determined. Ransom was ruled out due to the family’s modest means, according to the Daily News.

A neighbor, Helen Gonzales, told police that she had seen a green car matching the description of the getaway car the Sunday before the abduction. It was in the alley where Sharon eventually was taken, and the neighbor said a large woman in her 30s asked specifically where Gallegos lived.

“I pointed out the house after the woman told me she wanted Mrs. Gallegos to work for her,” Gonzales told the newspaper.

Gallegos, 36, worked as a maid at a local motel to support her children, according to the El Paso Herald-Post. 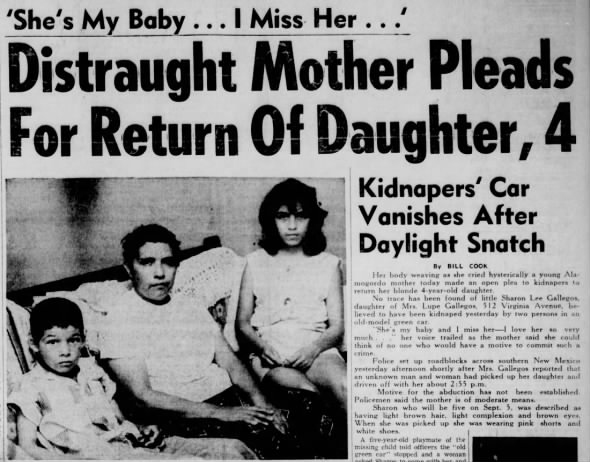 Gonzales said the woman also asked if Gallegos had a little girl and whether she had a lot of children. The stranger also questioned the layout of the home and whether it was one home or if it was divided into multiple apartments.

A visitor at the Gallegos home the day of the abduction told police and reporters that she saw the car, which she thought was a 1951 or 1952 Dodge or Plymouth, in the alley before Sharon was taken. Mary Lou Badial, 16, said she saw the woman sitting in the car and staring at the family’s house.

Another visitor, 11-year-old Dolores Badial, said she also saw the woman as she and Sharon walked to a nearby store together shortly before the kidnapping. The woman was “short and fat with dirty blonde hair,” the Daily News reported.

Gallegos said she believed the woman had made previous attempts to approach Sharon, who would often go alone to a store around the corner. The day of the abduction, however, Sharon was afraid to do so.

Dolores explained that Sharon was afraid when she saw the green car and asked to be picked up and carried as they passed the vehicle, according to the newspaper.

Gallegos reiterated the change in her daughter when she spoke to the Daily News in 1965, on the fifth anniversary of Sharon’s disappearance.

“My baby loved to go to the store around the corner and buy groceries for me,” she told the paper. “The last three days, she was afraid to go to the store by herself. She begged me or her older sister to go with her. She seemed restless and nervous.”

As Sharon was being abducted, Gallegos’ sister heard the commotion and ran to the window in time to see the car speed off with the girl inside. A white man was behind the wheel.

“My first reaction was to jump in the car and chase them,” Beatrice Gallegos said. “However, I suddenly remembered I didn’t even know how to drive, so I ran for help.”

The Gallegos home had no telephone, so the frantic aunt ran for help elsewhere. By that time, the car had vanished, she said.

As the days passed, anxiety over Sharon’s fate grew. A week out, FBI agents and state and local police intensified their efforts to find the girl and took their search national.

They and the grieving family pondered theories of why Sharon was taken, but none of the investigators’ leads panned out. Authorities, taking into account the previous sightings of the suspected kidnapper, surmised that the girl may have been taken by a childless couple who previously spotted Sharon and were drawn to her.

“I would do anything to have my little girl back,” Lupe Gallegos said, according to the Herald-Post. “If I thought it would help, I would try to raise money to offer to get her back.”

Gallegos and her other children would never see Sharon again.

Days after Gallegos spoke to the El Paso paper, a Las Vegas schoolteacher was in the desert at Sand Wash Creek, near Congress, looking for decorative rocks to add to his garden. As he searched, he stumbled upon the partially buried remains of a small girl.

The body had been burned before being buried.

According to Othram, pathologists determined that the child, estimated to be between 3 and 6 years old, had been dead for a week or two before she was found. Because of the high desert temperatures, a cause of death could not be determined.

The case was ruled a homicide. 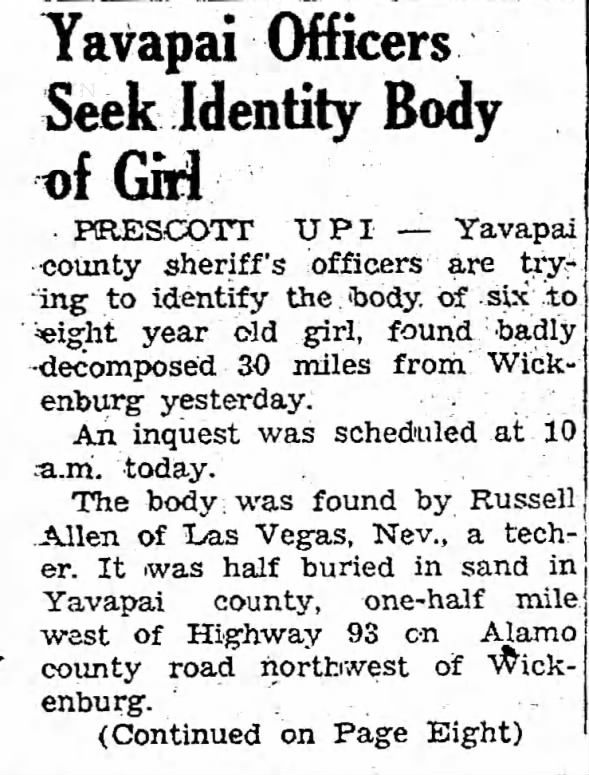 Details noted about her 55-pound body were heartbreaking.

“She had a full set of baby teeth which were in pristine condition,” an Othram news release stated. “The child was found wearing white shorts, a checkered blouse and male adult flip-flops that had been cut to fit her foot size and were tightened with brown leather straps.

“Her fingernails and toenails had been painted red.”

The community, heartbroken over “Little Miss Nobody’s” death, raised the funds to give her a funeral. Meanwhile, Yavapai County detectives pursued multiple leads, but each led to a dead end.

According to Yavapai County authorities, there had always been some suspicion that Sharon Gallegos might be “Little Miss Nobody.” The Albuquerque Journal reported in August 1960 that investigators were trying to determine if Sharon was the girl found in the days after the abduction in New Mexico.

At the time, however, authorities believed that the slain girl was older than Sharon. 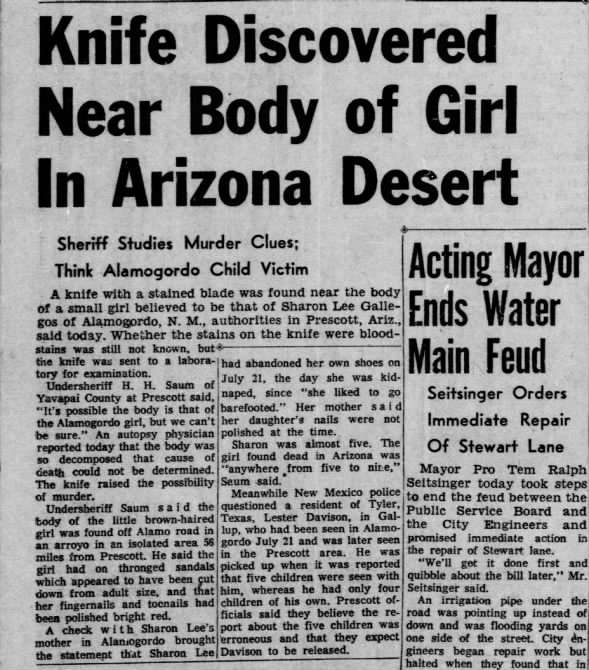 That changed more than 50 years later, in 2015, when cold case investigators had the girl’s remains exhumed so DNA could be extracted from her bones.

“DNA was also obtained from living relatives of Sharon Gallegos, precipitated by the determination of scientists with the National Center for Missing and Exploited Children that the age of the remains was closer to the age of the missing New Mexico child than originally thought,” a sheriff’s office news release said.

Though genetic material was obtained from the girl’s remains, DNA technology was still unable to definitively link the two cases. Several attempts were made with no results.

In 2021, Yavapai County detectives reached out to Othram, which has had success helping law enforcement agencies across the country over the past several years.

Othram officials explained that previous DNA testing had resulted in a mitochondrial DNA profile, or a profile that contained only the mother’s side of the girl’s genetic background. Authorities were later able to obtain a more complete profile, which was uploaded to the FBI’s Combined DNA Index System, or CODIS, in the hope that they would get a familial match with a relative who had, at some point in the past, committed a crime.

There was no match.

In 2018, the National Missing and Unidentified Persons System, or NamUs, attempted to identify a possible sibling of the girl. A reference DNA sample was obtained from one of Sharon’s siblings, but the comparison was inconclusive.

“In 2021, the Yavapai County Sheriff’s Office continued their pursuit for an identity by partnering with Othram,” the genealogy company’s news release said. “In December 2021, Othram took custody of skeletal remains and Othram scientists used forensic-grade genome sequencing to build a genealogical DNA profile.”

Despite the substantial degradation of the genetic material after more than 60 years, the sequencing worked and Othram genealogists were handed a high-quality DNA profile.

For the first time, the girl found in the desert in 1960 had a name, and detectives who worked the case over the years were able to see a photo of her.

Othram leaders said they are grateful to the financial donors who helped cover the cost of the DNA testing needed to solve the case.

Rhodes, the sheriff, said investigators are hopeful that someone who witnessed part of the abduction of Sharon Gallegos or saw her with her kidnappers might come forward.

“Though the little girl without a name now has one returned to her, the case of what happened to her in the 10 days between her abduction and the discovery of her remains is still a mystery,” the news release said. “YCSO hopes that anyone who was either an eyewitness to the abduction or has knowledge of what happened that July day in 1960 will come forward to assist in the continuing investigation.”

22-year-old woman dies after a tree fell on her car while driving on Route 11 in Sunapee, NH