ALOHA, Ore. — An Oregon Army veteran who spent more than a decade behind bars for killing his commanding officer 46 years ago is now charged with gunning down two high school students as they worked on a car’s engine in 1974.

Steven Paul Criss, 65, of Aloha, was arrested Nov. 3 and charged with the murders of Peter Zito Jr., 18, of Beaverton, and Donald Bartron, 16, of Aloha. Criss is being held in the Washington County Jail.

Criss is accused of using a .22-caliber handgun — the same gun he used to kill Army Sgt. Jacob “Kim” Brown two years later in Washington state — to kill Zito and Bartron the morning of Oct. 3, 1974.

The teens were slain as they worked on the engine of Zito’s 1956 Oldsmobile in the parking lot of the Oak Hills Recreation Center just outside of Beaverton. Each had been shot multiple times in the head.

Washington County Sheriff’s Office officials said Criss, who was 17 at the time of the murders, was an early suspect because he was a co-worker of Bartron’s at the Black Angus Restaurant in nearby Hillsboro. Cold case Det. Mark Povolny said earlier this month that Criss “had reason to be upset with Donny and Pete.”

Povolny said there had been an argument between Criss and Bartron at the Black Angus, but he declined to say what the argument was about.

Criss was arrested for theft two months after the homicides, at which time the arresting officer found an illegally concealed .22-caliber handgun in his car.

Though ballistics evidence could not link Criss’ gun to the murders using 1974 technology, cold case investigators earlier this month submitted the evidence to the federal Bureau of Alcohol, Tobacco, Firearms and Explosives for testing using the latest technology.

“While reviewing the case file, we decided to take a second look at the ballistic testing since it had been done nearly 50 years ago,” Povolny said during a Nov. 4 news conference. 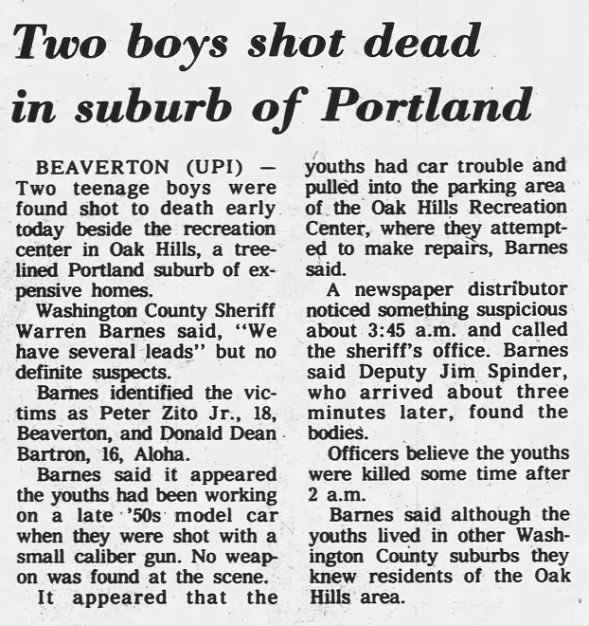 The ATF’s testing indicated that the gun used to kill Brown in 1976 was the same weapon that had killed the teens. The Oregon State Police crime lab confirmed the match.

“To date, this is the oldest known match nationwide that the ATF has ever confirmed for a prosecutable case,” the detective said.

Povolny said additional evidence against Criss has been uncovered in the case but declined to give details, citing the ongoing nature of the investigation.

Washington County Sheriff Pat Garrett commended the families of the slain teens for their patience and devotion to seeking justice for their loved ones. Zito’s sister, Barbara Zito, was present as authorities announced the arrest of her brother’s alleged killer.

“It’s a difficult thing to deal with, to have to accept that your brother can be murdered this way and there is nobody accountable for it,” Zito said, according to KGW in Portland. “He was just a happy kid, and it was terrible when I heard he was gone.”

Fatal dispute and a wrongful arrest

Shortly before 4 a.m. on Oct. 3, 1974, an Oregonian newspaper delivery driver in the tony suburban neighborhood of Oak Hills made a startling discovery. In the parking lot of the recreation center sat a car, its trunk and hood both open.

Next to it he could see a person lying on the ground. It was Pete Zito.

Bartron, who had been working on the engine, was slumped under the car’s open hood.

Detectives theorized that the boys were having engine trouble and stopped to fix the problem. Witnesses in the neighborhood recalled hearing gunshots around 12:30 a.m., around three hours before the teens’ bodies were found.

Loved ones of Zito and Bartron were stunned by the murders. Zito’s mother, Faith Zito, described her son to the Oregonian as a “gentle boy” who loved his car and the family’s four cats. An Aloha High School dropout, he was working as a dishwasher and hoped to earn his diploma through Portland Community College, the newspaper reported.

Bartron was also in the process of dropping out of school, school administrators said at the time.

Within 12 hours of the murders, authorities had zeroed in on who they believed had committed the crime — and it was not Criss.

Joseph Amir Wilson, the 18-year-old son of Iranian immigrants, was arrested and charged with murdering the teens, who were classmates of his at Aloha High. According to police, Wilson had been assaulted at the recreation center a few hours before the shooting.

“Detectives suspected Mr. Wilson wanted to kill the person who beat him up, and to also kill that person’s brother, but instead killed Donny and Pete, as their families called them, in a case of mistaken identity,” Povolny said. 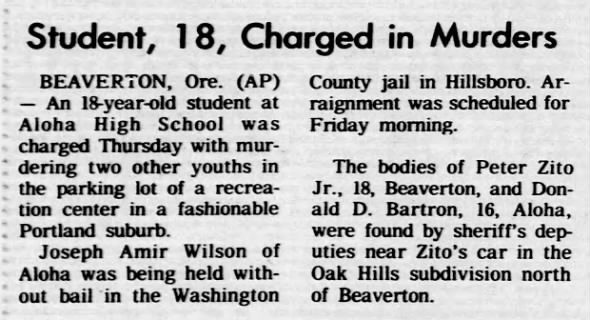 Wilson denied his involvement but had no one to corroborate his whereabouts the night of the murders.

On Jan. 14, 1975, the morning his trial was set to start, the charges against the teen were dropped. Prosecutor Ray Robinett told reporters there was no physical evidence linking Wilson to the crime.

Trace metal analysis of his hands, used to determine if he had recently fired a weapon, was negative. The results of multiple lie detector tests, which were reviewed by five independent polygraph experts, also showed he was telling the truth about his innocence.

Meanwhile, at least one investigator, Det. Jim Welch, had believed Wilson’s denials from the beginning.

“Det. Welch never believed Joe Wilson was the killer, and he correctly identified Steve Criss as the suspect within weeks of the murders,” Povolny said.

Watch the Nov. 4 news conference below.

When Spinden, who had found the slain teens, arrested Criss for theft in December 1974, Welch had Criss’ handgun sent to the crime lab for testing that same day. The lab was unable to match the gun to the bullets that had killed the boys, so the weapon was returned to Criss after his theft case reached its conclusion.

After graduation, Criss joined the Army and was stationed at Fort Lewis. The base, which merged with McChord Air Force Base in 2010 to form Joint Base Lewis-McChord, is located outside of Tacoma, Washington.

Criss was 19 years old on Oct. 8, 1976, when Brown, his commanding officer, failed to return to his Olympia home after telling his wife he needed to meet a man to collect a debt. The 22-year-old’s bullet-riddled body was found in a ditch about 10 miles from the Army base.

According to Criss’ subsequent confession, the murder stemmed from the debt Brown was trying to collect.

“Steve had damaged Sgt. Brown’s car and owed him a few hundred dollars,” Povolny said. “Instead of paying his debt, he shot Sgt. Brown five times in the head. He used the same .22-caliber handgun which had been found in his car in December 1974.” 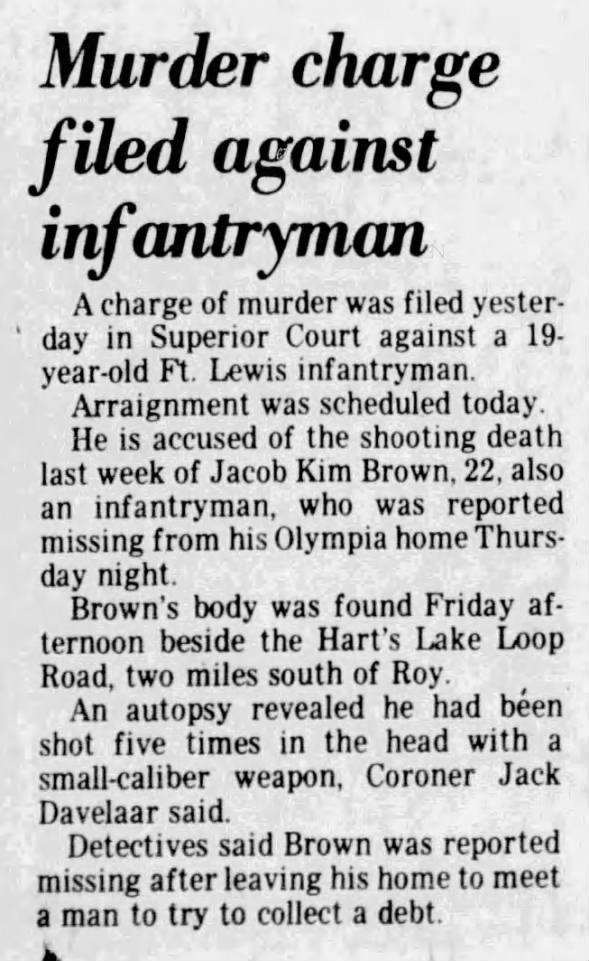 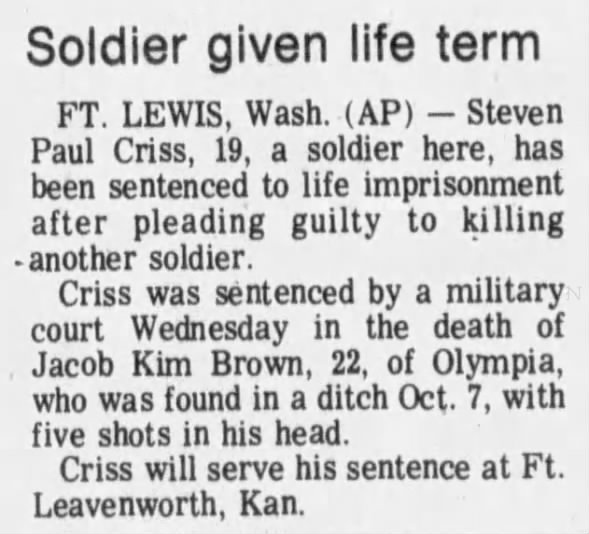 In December 1976, Criss pleaded guilty to Brown’s murder and was sentenced to life in prison. He was sent to serve his time at Fort Leavenworth, Kansas.

Criss was paroled in 1988 after serving just 12 years of his life sentence, authorities said. At the time of his Nov. 3 arrest, he was living in Aloha and working in Hillsboro, though Povolny did not say what occupation he held.

Detectives brought a little piece of the past to the arrest, the cold case detective said.

“Mr. Criss was taken into custody using the same pair of handcuffs used when Deputy Spinden arrested him in December 1974,” he said.

Povolny credited a multitude of agencies for their assistance in solving the case after 48 years. He focused, however, on the work that Welch did, even after Wilson had been arrested and indicted for the crime.

“His investigation in 1974 documented and preserved vital evidence,” Povolny said of Welch, who died in 2009. “Without his excellent police work, this case would’ve never been solved.”

Detectives are now investigating whether Criss could have been involved in other killings following his release from federal prison.

They have also issued a formal apology to Wilson, who died of a heart attack in 2000.

“Although the charges against Mr. Wilson were dropped in January 1975, it is clear he was innocent and should never have been arrested,” Povolny said.

“I am extremely thankful the charges were dropped in 1974 before prosecution, but that does not change the fact that he spent several months in jail, charged with two murders he did not commit,” the sheriff said. 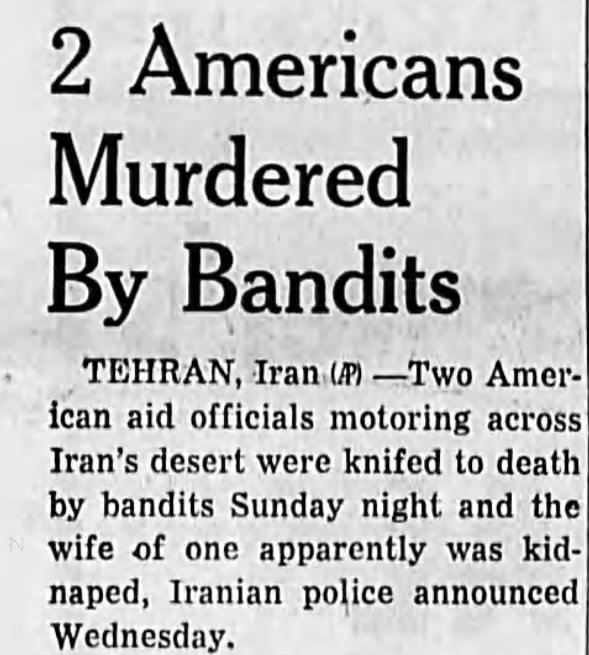 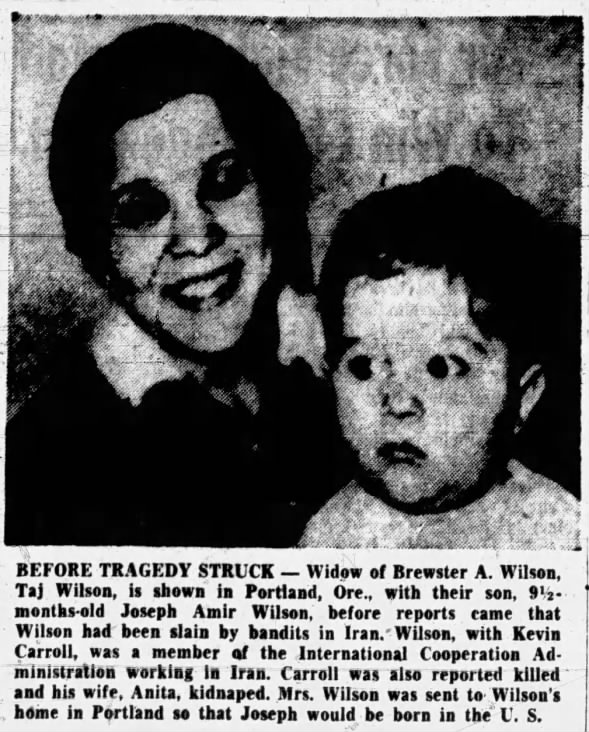 Detectives have tried to find Wilson’s remaining family to offer the apology in person but have been unable to. Wilson’s father, Brewster Wilson, was slain in Iran when he was a baby.

At the time of his arrest in 1974, Wilson lived with his paternal grandmother, who had raised him. Ora Wilson told reporters upon his release that she wanted to move from the U.S. with her grandson.

“Joe is a good boy,” she said, according to a story in Salem’s Capital Journal. “He’s my boy, and we’re going to move away and forget all of this business.”

The afternoon he was released from jail, Wilson went to the high school to see if he was still enrolled, his grandmother said. He was not.

Prior to his arrest, Wilson was slated to graduate that month.

“I’d have been out of school by now if it weren’t for that jail,” he said.

Wilson, who went on to become a self-employed landscaper, lived in Portland when he died, authorities said. He was 43 years old.

Anyone with information about the murders, or about Criss’ activities and whereabouts since his 1988 release from prison, is asked to call Washington County investigators at 503-846-2700. Anonymous tips can also be submitted to Crime Stoppers of Oregon at crimestoppersoforegon.com.

Celsius class action settlement could get you $250

DA: Duxbury mother under police custody for murder charges in deaths of her 2 children