Joke's on you: April Fools' Day 2019 pranks from Honda, McDonald's and more

Every year, brands prank the public with gags and other jokes – from products to announcements of special projects. Here is a roundup of some of 2019's April Fools' Day pranks:

The phone booth makes a comeback in the form of the T-Mobile Phone BoothE. Referred to as “vertical rectangular cubes ... packed with advanced communication technology,” on the T-Mobile website, the retro joke product is for people who want to keep phone calls private from eavesdroppers. 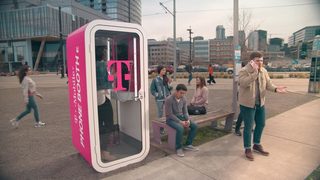 “It’s 2019 and people are walking around with a finger in their ear, trying to have a conversation! The T-Mobile Phone BoothE solves this problem,” John Legere, CEO of T-Mobile, said in a statement in the prank announcement. “The whole point of having a mobile phone is so you can converse on the go, but there are certain conversations that call for privacy. This is a major evolution in how we think about mobility – now the busiest street corner can be your cellular sanctuary.”

Customer pain points come in all shapes and sizes!! For instance, trying to talk to someone on the phone when there’s non-stop noise all around you! 😡🗣💥🚔🚧 Well turn that frown upside down and say hello to the NEW @TMobile Phone BoothE 🙌🏻

U.K.-based games room company Liberty Games has at least three prank games being touted as available on its site.

Features of the office simulator include special missions like feeding the fish, clearing printer jams and PowerPoint presentations.

The foosball table includes latex masks of President Donald Trump and Kim Jong-un and can have pitch mines and a thermonuclear foosball as optional additions.

Disappointed with the result of the #Trump #Kim #Hanoi summit?

Replay this century’s second-bigliest diplomatic event with a game of Nuclear #Foosball!

The automatic, self-cleaning litter box company is offering a Cat Sheet that takes advantage of a feline's need to lay where ever you may be working, reading, or doing almost anything else.

"Cat Sheet enhances the natural insulating properties of paper to provide a consistent, on-demand heating source for your cat," according to the product webpage.

Although the Cat Sheet isn't real, Litter-Robot is offering a novelty mouse pad for those who buy a new Litter-Robot 3.

"The library will house over 250 million volumes of imagery, a full floor showcasing over 14 million reels of film, and a listening bay where visitors can enjoy over 20,000 music tracks," the company said in a press release. "All content will include the renowned Shutterstock visual and audio watermarks."

Shutterstock also released a video touting the fake structure. Check it out here.

Restaurant company McAlister's Deli jokingly announced it will be selling kegs of its popular sweet tea. 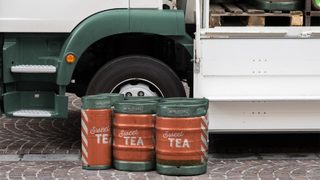 “For some, 32 oz. cups just weren’t enough to quench those cravings, so we maximized the amount offered by more than 60 times for our loyal tea fanatic to fill up on,” the release continued.

The company later admitted: "Please note that while we love our sweet tea and so do our loyal fans, this is actually an April Fools' Day prank."

"Knowing how devoted people are to their pets, we saw a tremendous opportunity to introduce an entirely new way for pampered pets to feel just as comfortable at home as their owners," Wayfair Registry spokeswoman Julie Cassetins said in a news release. "With Groom'd by Wayfair Registry, pups tying the knot can register for furniture, décor and more that they need to create their version of happily ever after."

The company actually has a wedding registry available for humans tying the knot.

Introducing Groom'd, a wedding registry for dogs! For the first time ever, pups can conveniently register for furniture, decor, and more that will help start their lives together. See all the perks that are leaving every breed in puppy love with Groom’d! #Wayfair https://www.wayfair.com/y85c728cuK

The DIY stuffed toy company gets into the dating app space with Build-A-Bae. The matchmaking dating app uses a "proprietary matchmaking algrrrrithm" to match couples based on what is in a person's profile.

"Our algrrrrithm is extremely complicated and based on science, logic and imagination. If we said it was magic, we wouldn't entirely be lying," the company said. "Think about it this way: It takes six steps to create a furry best friend and it takes a lot more when it comes to love."

But the joke was short lived. A visit to the Build-A-Bae site prompts a big "April Fools" message and a 25 percent off code for furry friends.

COMING THIS SPRING: #BuildABae! https://t.co/MWmUCBLkaZ
We're taking everything we know about making long-lasting friendships and are using it to add a little more heart to the lives of those who love us. No more swiping. No more liking. Just love, straight from the ❤️️. pic.twitter.com/GIRzfKPON9

The 2019 Honda Passport comes in a retro 1990s-inspired trim called the Pastport.

"The authentic look of the new Passport on the outside, yet simplified with everything you love about the '90s on the inside," the company said in the April Fool's ad for the vehicle.

The retro interior of the vehicle includes a cassette tape player, a paper map navigation system, air conditioner, digital clock and beeper mount. The only button on the steering wheel is the horn.

Fans of the joke can call the real phone number in the ad below:

In celebration of its centennial year, the Chicago Bears announced players jerseys would have three digits in 2019. Each player would have a "1" added to the front of their existing jersey numbers.

"First, I thought the idea was kind of crazy," quarterback Mitchell Trubisky said. "I'm like, 'Why are we all changing our numbers?' But you know what, it's an honor to be part of this historic franchise. We're celebrating our 100th-year anniversary and I think it will be pretty cool to put the '1' in front of every single jersey number."

The NFL team even went so far in its April 1 joke to update the team roster.

McDonald's is taking advantage of fans with sweet and savory tastes with Shake Sauce. The milkshake dips come in vanilla, chocolate, Shamrock and strawberry.

The Australian version of the chain is offering a McPickle burger.